Following is the abstract and a graph from the paper that supposedly proved that undercorrection of myopia causes a significant increase in myopia progression ("Undercorrection of myopia enhances rather than inhibits myopia progression" by Chung/Mohidin/O'Leary, Vision Research 2002 Oct;42(22):2555-9). The experiment was conducted in Kuala Lampur, Malaysia, and used Chinese and Malay schoolchildren as subjects.

ABSTRACT: "The effect of myopic defocus on myopia progression was assessed in a two-year prospective study on 94 myopes aged 9-14 years, randomly allocated to an undercorrected group or a fully corrected control group. The 47 experimental subjects were blurred by approximately +0.75 D (blurring VA to 6/12), while the controls were fully corrected Undercorrection produced more rapid myopia progression and axial elongation (ANOVA, F(1,374)=14.32, p<0.01). Contrary to animal studies, myopic defocus speeds up myopia development in already myopic humans. Myopia could be caused by a failure to detect the direction of defocus rather than by a mechanism exhibiting a zero-point error." 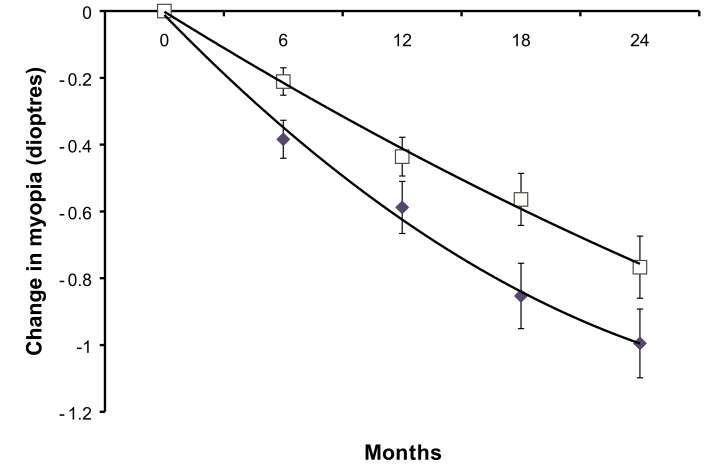 Fig. 1. Mean changes (vertical bars show 1 SEM) in refractive error for the undercorrected group (filled symbols) and the fully corrected group (open symbols) over the two-year period of the study. There were 47 subjects in each group.

On the basis of this experiment, eye doctors are telling their myopic patients that if they do not wear glasses that give them perfectly clear distance vision, their blur for distance objects with or without glasses (severity of myopia) will get worse. However, this experiment did not accurately measure the effect of introducing glasses in the first place, or of increasing an existing distance correction. It did not disprove the opposite notion, suggested by animal studies, that the eye will in fact adapt to a new or stronger prescription and become less able to see clearly in the distance as before.

The number of subjects who had been uncorrected or significantly undercorrected before the onset of the experiment is not given, nor was the amount of previous undercorrection controlled for in any way. This is important, since a previous study involving the same authors ten years earlier showed that 38% of Kuala Lumpur Chinese schoolchildren referred to their clinic were uncorrected myopes. An uncorrected myope coming in with a -1.50 refraction and receiving first-time prescription of -0.75 at the beginning of the experiment would be put in the "undercorrection" group. Since the minus power in this case would have actually increased, it would be wrong to attribute any increase in myopia in the beginning of the experiment to undercorrection and not to an increase in prescription. It makes sense to exclude the change during the first six months from analysis and treat it as a "run-in" period. This minimizes the potential effect of an unknown number of subjects in the "undercorrected" group starting out treatment with their first pair of glasses, or with a large increase in correction. Now look at what happens to the graph when we only consider the change in refraction after six months. Below, the "undercorrected" curve from the original graph has has been translated vertically so that its six month point meets that of the "corrected" curve. This point now becomes the new "time zero."

With the "6-month run-in" graph, we see that the difference in change in refraction over the last 18 months of the experiment is within the margin of error. In other words, the error bars overlap, and so the difference between the groups is shown to be statistically insignificant. Visual inspection of the original graph shows that myopia in the "undercorrected" group was levelling off, while in the "fully corrected" group it was continuing to increase at a constant rate. If the experiment had continued for another 12 months, the "undercorrected" group might well have come out with less myopia even without factoring out a run-in period. Note that during the last six months of the experiment, the "undercorrected" group progressed less than the "fully corrected" group. It is well known that the experiment was intended to go for 36 months, but was stopped at 24. It is often implied that the reason for cutting the experiment short was that the "undercorrection" treatment was clearly causing more myopia. Analysis of the above graphs shows that such a conclusion could not be drawn, especially not at month 24. If anything, at month 24, one might reasonably conclude that the difference between the two groups was about to reverse. Principal Investigator Daniel O'Leary is quoted as saying in New Scientist: "The study was meant to run for three years but after two years, when we found out we were making the children's eyes worse, we had to stop it prematurely." Which children's eyes were getting worse? In truth, all of them were. But at the two year point, the fully-corrected eyes were getting worse to a greater degree than the undercorrected ones.