Do glasses make vision grow worse? That’s what many patients with are asking their eye doctors who want to keep their functional, if not perfect, vision without glasses. In response, some eye doctors claim that studies have shown that wearing glasses to see better has no effect on one’s underlying visual condition. The following is one study often cited. “Effects of spectacle intervention on the progression of myopia in children.” Ong E, Grice K, Held R, Thorn F, Gwiazda J., Optometry & Vision Science. 76(6):363-369, June 1999.

A key line cited from the abstract is “the present study failed to demonstrate any overall effects of spectacle intervention on the progression of human myopia.”

However, a closer reading of the abstract, and especially the data presented in the paper, paints the opposite picture: wearing glasses to correct myopia (nearsightedness) does make myopia worse.

The abstract says plainly “the nonwearers exhibited an age-adjusted 3-year progression approximately one-half that of the full-time wearers”. But that's just part of the story.

Reading the full text of the paper we learn that there were a total of 43 subjects, and only 5 of them were in the “nonwear” group. Two of those did not progress (require a stronger prescription) at all, and only one of them progressed more than a diopter over 3 years (compare this with the “average” 1.5 D per three year rate for wearers). We also see that only one of the other 38 subjects, who all wore minus lenses more or less regularly, avoided becoming more myopic. 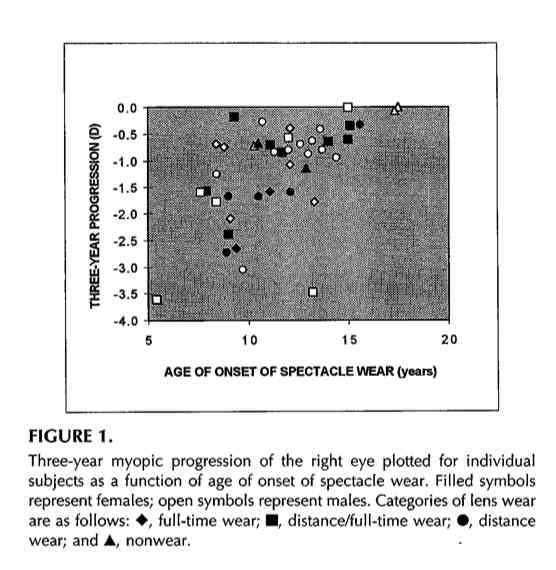 So in sum: in this study, those who did not wear glasses had a 40% chance of avoiding myopia progression, while wearers had less than a 3% chance. Do these figures hold for larger populations? We do not know. We do not know if this is an overestimate or an underestimate of the effect of wearing glasses. 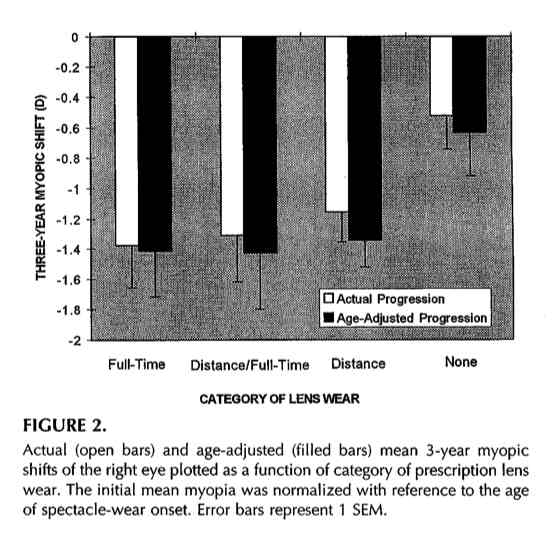 In the paper, the reserarchers said: “The small sample size of nonwearers prevents us from reaching definitive conclusions about the nonwear group data.” And “The effects of spectacle intervention on longitudinal changes in refraction is a clinically relevant issue. Unfortunately there is a dearth of human data addressing this problem.” Also: “Further work is warranted using a larger base of myopes to elucidate and demonstrate conclusively the effects of lens wear on the progression of myopia.” I agree. The original paper was published in 1999. I contacted those researchers in 2007. They said no follow-up was undertaken or even planned.